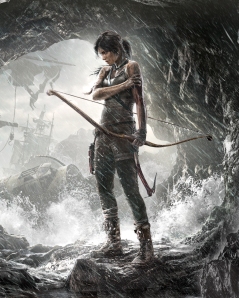 It’s not often that I can lose myself in a game entirely, and spend hours just ‘bashing’ a game till I’ve finished it entirely. The most recent ones are The Elder Scrolls V: Skyrim, BioShock Infinite, FEZ, and Tomb Raider.

The last three are actually fairly recent, with BioShock Infinite being purchased about two weeks ago, and FEZ along with Tomb Raider only yesterday.

However, this post isn’t about losing myself in the aforementioned games. It’s more about the other rarity, which is when a reboot of the gaming franchise actually succeeds in being better than all other previous titles.

Tomb Raider, I conclude, has done this and more.

Everything about this game screams ‘NEW’, and indeed in gameplay it does feel that way. The most important thins though, is that not only has Tomb Raider brought in new gameplay elements (survival skills, XP, skill mastery, base camps, etc.) but it has also combined these with what would be considered truly original Tomb Raider elements such as ‘reaction time’ and other things. Also, a major change in the game is the almost ‘free roam’ style. Sure, there’s a main quest line, but you can deviate, explore, raid, and do other independent things regardless of where you’re at. I think that the other thing to note is that the chronological order has been completely blown away with this release, with it being set before all the original Tomb Raider games.

This brings to light a lot of things about Lara‘s past, but also helps the gamer connect to the character. In the original games, we played as Lara trying to get into tombs, kill whatever the hell was in there, and get out. No remorse, no mercy. Quick, clean, efficient.

In this game, however, we start doing the exact opposite. Trying to get out of a ‘tomb’, and simply seeking to get away from the cursed island filled with bat-crazy natives and a infinite forecast of rain. The cut-scenes that randomly dot Lara’s journey to becoming a ‘Tomb Raider’ add infinite depth to the feel of the game also, with Lara being scared out of her wits when first alone, having literally zero confidence in getting anywhere at first, and almost being sick when having to shoot a man through the head in self defence. It paints her in a totally different light than what I’m used to, and what many experienced players are, but I would say it’s been a positive overhaul, rather than a negative.

Honestly, I think that the line on Steam that I saw just about sums it up:

There’s a survivor in all of us.

A simple man, trying to make his way in life. View all posts by Alex Holyoake

Drop me a comment, and I'll see how fast I can reply! Cancel reply